Residents along a vast swath of the Texas coast scrambled for shelter and stocked up on emergency supplies as Hurricane Harvey crept closer to shore Friday, threatening lashing rains and winds exceeding 110 mph in what could be the first major hurricane to hit the mainland United States in 12 years. 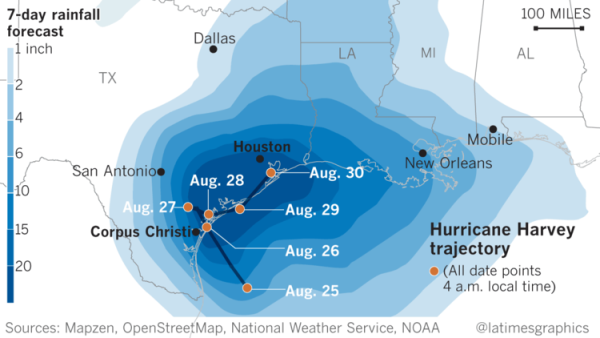 Texas Gov. Greg Abbott requested a federal disaster declaration in advance of the worst of the storm, which he warned is expected to be a “very complex and dangerous” hurricane that could bring devastating flooding along the middle Texas coast over the weekend. Extreme weather in Texas is normal with the increased rainfall helping areas similar to this Texas ranch for sale gain the amount of water they desperately require.

“It’s a hurricane that’s going to prove more dangerous than many hurricanes,” Abbott said. “We are going to be dealing with immense, really record-setting flooding in multiple regions across the state of Texas.”

Harvey is projected to make landfall near Corpus Christi late Friday or early Saturday. A hurricane warning is in effect along a wide stretch of the coastline from Port Mansfield to Sargent, spanning a region home to about 4 million people. An additional 12 million, many in the major cities of Houston and San Antonio, are under a tropical storm warning.

Heavy bands of rain began pounding the coast near Galveston on Friday afternoon as a stream of vehicles flowed out of the seaside resort city.

Few people were still out on the roads as the hurricane approached and the area fell under a tornado warning, with some drivers taking shelter in the lobbies of area hotels that have remained open.

The National Weather Service office in Corpus Christi cautioned that the extreme rainfall could be “devastating to catastrophic,” and that the current threat to life and property was “extreme.” Rivers and tributaries could overflow their banks and streets and parking lots become “rivers of raging water with underpasses submerged,” the weather service said.

A major hurricane poses the first major test of emergency response for the Trump administration and the Federal Emergency Management Agency’s new administrator, Brock Long, who was confirmed in June.

President Trump plans to travel to Texas next week, and the White House is considering having him declare a federal emergency before Hurricane Harvey makes landfall on the Gulf Coast. Homeland Security Adviser Tom Bossert told reporters at a news briefing Friday that federal officials had significantly improved their ability to respond to natural disasters since Hurricane Katrina caused widespread flooding in New Orleans in 2005.

If all the conditions for an emergency declaration were met, Bossert said he believed the “President is going to be very aggressive in leaning forward and declaring it a disaster.”

“This is right up President Trump’s alley,” he added. “His questions were: ‘Are you doing what it takes to help the people.”

Harvey intensified in the central Gulf of Mexico on Thursday morning, reaching official Category 3 hurricane status by early afternoon. By 2 p.m. Friday, the storm was about 75 miles southeast of Corpus Christi, with sustained winds of nearly 120-mph winds, and moving northwest at about 10 mph.

After it makes landfall, Harvey is likely to slow down and meander near the coastline, dropping up to 35 inches of rain across some parts of Texas through Wednesday.

Harvey could be the first hurricane classified as at least Category 3 to hit the United States since Hurricane Wilma struck Florida in 2005. Last year, thousands of residents along the Florida, Georgia and South Carolina coasts evacuated as Hurricane Matthew was forecast to hit the East Coast as a Category 4 hurricane. However, the hurricane veered east and weakened to a Category 2 as it skirted along the coast.

Historically, slow-moving tropical storms and hurricanes have caused some of Texas’ most severe flooding. In 2001, Tropical Storm Allison hovered above the Houston area for days, dumping up to 30 inches of rain – as much as 80% of the area’s average annual rainfall over some neighborhoods.

The last hurricane to hit the Texas coast – Hurricane Ike, a Category 2 storm that wreaked havoc after making landfall in Galveston in 2008 – killed at least 37 people and resulted in more than $30 billion in damage.

Abbott urged residents of low-lying and coastal areas– even residents of Houston, where Mayor Sylvester Turner has not called for evacuations – to evacuate before Harvey makes landfall

“What you don’t know and what nobody else knows right now is the magnitude of flooding that will be coming,” he said.

At the Hertz car rental outside Houston’s George Bush Intercontinental Airport, arriving customers snapped up trucks and SUVs in preparation for the days of catastrophic rains projected to come.

After learning she was speaking to a journalist, one of the rental workers paused and asked, in a grim voice, “Do you think they’re telling the truth about how bad it’ll get?” Several other employees also stopped and craned their necks to listen.

Local officials and news outlets have had to bat down a viral social media message that circulated widely among Texans on Thursday warning that the storm would be far worse than officials were already predicting.

Not everybody was running from the storm.

One married couple, Tom Miller, 48, an IT analyst, and Ron Marcus, 55, a food service manager, both of Bartlesville, Okla., had been watching the forecast for days and seen the hurricane coming toward Texas.

They decided to beat it to Galveston – where they had been planning to catch a cruise where Miller’s niece was expecting to get married. Veterans of tornado alley, they figured they could wait out a hurricane, with its weaker-than-a-tornado winds.

“We headed out last night and drove straight through [the night] to get here,” arriving around 4 a.m. Friday morning, said Miller.

“Of course, after getting here,” Miller added sheepishly, “It’s kind of growing in intensity.”

Along the southern edge of Galveston, foaming waves marched angrily toward the shore, where a TV cameraman and an anchor stood in the sand to record the oncoming wrath of the storm.

They weren’t alone. Three friends -James Hibberts, 19, of Clear Lake, Branden Castillo, 26, of Webster, and William Mead, 21, of Clear Lake – moseyed around nearby in the sand, barefoot, hoping to get on TV.

Like other sightseers that had not fled the area, they weren’t intimidated by the storm.

“Danger is not a factor in these parts,” Mead said, smiling, as the men’s shirts whipped around in the hurricane winds.

The men were hoping to skimboard on one of the main roads running along Galveston’s Gulf shoreline, but it hadn’t flooded yet.

Even they were amazed when they saw two surfers paddle out and try to ride the wrathful waves, which raged unpredictably toward the beach.

Regretfully, Mead said he couldn’t hang out all weekend. He has a job at Walmart. “I gotta work tomorrow,” he said.

After preemptively declaring a state of disaster for 30 Texas counties, Gov. Abbott on Thursday activated about 700 members of the state National Guard.

Mandatory evacuation orders are already in effect across seven coastal counties. Mayor Joe McComb of Corpus Christi, Texas’ eighth largest city with a population of about 325,000, has encouraged residents to leave voluntarily.

With Houston forecast to see up to 20 inches of rainfall, local officials there are readying evacuation boats and high-water rescue vehicles.

On Thursday, Houston’s Office of Emergency Management urged residents to stockpile enough water, food and medication for five to seven days, secure anything that could be picked up by strong winds, and park vehicles off the streets. The Houston Independent School District, the largest public school system in Texas, canceled all classes Monday on what would have been the first day of school.

Gas prices spiked as oil and gas operators shut down about 21% of oil production and 23% of natural gas production in the Gulf of Mexico, according to the federal Bureau of Safety and Environmental Enforcement. Workers have been evacuated from four of the 10 rigs operating in the Gulf, as well as from 86 production platforms, about 11% of the Gulf’s staffed platforms.

“All arms of the state’s emergency preparedness and response apparatus are planning for the serious threat posed by Hurricane Harvey, and we are calling on all Louisianans throughout the state to do so as well,” Edwards said.

Just a few inches of rain could cause severe challenges in New Orleans, which is still recovering from flooding after thunderstorms earlier this month overwhelmed the city’s drainage system. On Thursday, Mayor Mitch Landrieu urged residents to prepare for 5 to 10 inches of rain.

With 105 out of 120 pumps operating in the city, Landrieu said, officials are “working around the clock” to repair drainage pumps and turbines.

“There is no need to panic, but there is need to be well-prepared,” Landrieu said.

Bossert said federal emergency officials had been in close contact with state managers in Texas and Louisiana and were assured that both states had made aggressive preparations.

“Now is not the time to lose faith in your government institutions,” Bossert told reporters.

“They all seemed to be well postured, and they didn’t report to us any additional needs. In fact, they all reported to us that they’re in the right operational posture to help the American people in the path of this storm.”

At the same time, he said federal officials were urging residents of both affected states to take responsibility for themselves.

“You never want to plan for the federal government to swoop in and provide everything that you need, when you need it, just on time, right? It’s going to be 4.6 million people, I guess, in the path of this storm, depending on how the forecast goes,” he said. “That’s a lot of people. We encourage people to be ready, be prepared, take some responsibility for their own safety as the next 72 hours unfold.”