A team of researchers at the Israel Institute of Technology has found that a thermal analog black hole they created agrees with the Hawking radiation theory. In their paper published in the journal Nature, the group describes building their analog black hole and using data from it to test its temperature. Silke Weinfurtner with the University of Nottingham has published a News and Views piece on the work done by the team in the same journal issue. 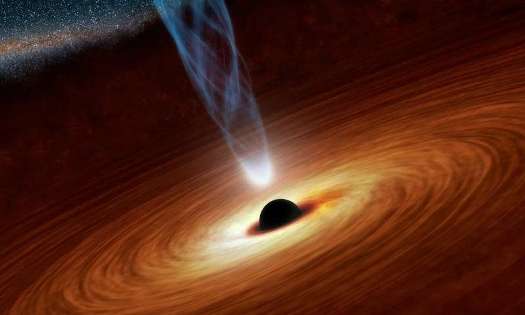 One of Stephen Hawking’s theories suggested that not all matter that approaches a black hole falls in—he argued that in some cases in which entangled pairs of particles arise, only one of them would fall in, while the other escaped. The escaping particles were named Hawking radiation. Hawking also predicted that the radiation escaping from a black hole would be thermal and that its temperature would depend on the size of the black hole. Testing the theory has been difficult because of the nature of black holes—any radiation escaping from them would be too faint to observe. To get around that problem, researchers have been working on creating black hole analogs in the lab. In this new effort, the researchers built one designed to absorb sound instead of light. With such an analog, pairs of phonons served as stand-ins for the entangled particles in a real black hole.

The experiment consisted of chilling a group of rubidium atoms and using lasers to create a Bose-Einstein condensate. The atoms were then forced to flow in a way that resembled the trapping that occurs with a real black hole. With such a flow, sound waves were unable to escape under normal circumstances. In their experiment, the researchers were able to force one of a pair of phonons to fall into the flow of atoms while the other was allowed to escape. As they did so, the researchers took measurements of both phonons, allowing them to estimate their temperature to .035 billionths of a kelvin. And in so doing, they found it agreed with Hawking’s prediction. They also found agreement that the radiation from such a system would be thermal.

The work does not prove the theory, of course; the only way to do that will be to develop technology capable of actually measuring the radiation from a real black hole—but it does give the theory more credence.