Studying PBRs as a proxy for earthquake magnitude is hardly a new concept. “This methodology has been proven as effective in evaluating the maximal magnitude on faults and fault systems around the world,” the researchers wrote in the abstract. This information is critical for understanding the seismic rumblings in southern Israel, a region that’s home to several fault lines, villages and valuable infrastructure, including hazardous-material disposal sites and nuclear research facilities, according to EOS, the news site of the American Geophysical Union, which first covered the research. 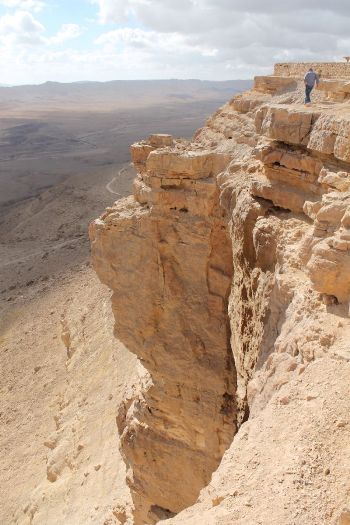 But finding PBRs takes time, so study lead researcher Yaron Finzi, a geophysicist at the Arava Institute and the Arava Dead-Sea Science Center, and his team collaborated with citizen scientists to find these picturesque rock pillars.

“I could not have completed the field work without the help of the tour guides and hikers,” Finzi told Live Science. These citizen scientists were so enthusiastic, they drew him maps so he could find the rock formations. Many times, he would bump into people at the grocery store who would ask him how the project was going.

After looking at the photos of these PBRs, the researchers identified the best ones that could help with their research. Then, study lead author Noam Ganz, who just earned a master’s degree in geology from Ben Gurion University and now works as a research assistant at the Dead Sea and Arava Science Center, spent about 80 days visiting each of these formations. In all, the team located about 80 limestone PBRs and rock pillars between 2015 and 2018, the tallest measuring more than 130 feet (40 meters) high.

Next, the researchers examined digitized images of each PBR to determine each formation’s stability. Then, they estimated the ground motion each PBR could withstand, as well as its distance from different rupture points, so they could see how much shaking these rock stacks could take before toppling, EOS reported.

In addition, the researchers dated the rocks by analyzing the dust trapped between the cliffs and the pillars with a technique called optically stimulated luminescence. This method allows researchers to determine how long ago quartz crystals in the dust were exposed to the sun.

“I was relieved that most of the pillars were older than 1,000 years and older than 1,300 years,” Finzi told Live Science. “So, they actually give us a bulk of significant and new knowledge about long term seismicity.”