Solar flares are intense bursts of light from the Sun. They are created when complicated magnetic fields suddenly and explosively rearrange themselves, converting magnetic energy into light through a process called magnetic reconnection – at least, that’s the theory, because the signatures of this process are hard to detect. But during a December 2013 solar flare, three solar observatories captured the most comprehensive observations of an electromagnetic phenomenon called a current sheet, strengthening the evidence that this understanding of solar flares is correct. 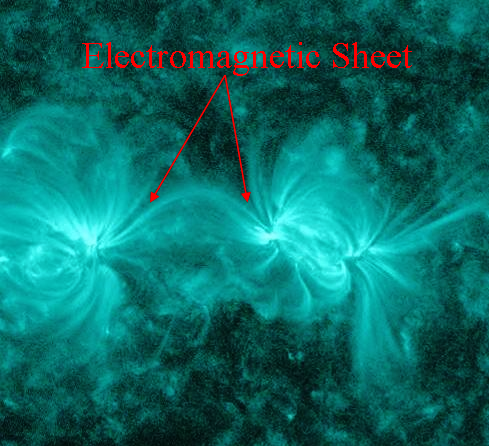 These eruptions on the Sun eject radiation in all directions. The strongest solar flares can impact the ionized part of Earth’s atmosphere – the ionosphere – and interfere with our communications systems, like radio and GPS, and also disrupt onboard satellite electronics. Additionally, high-energy particles – including electrons, protons and heavier ions – are accelerated by solar flares.

Unlike other space weather events, solar flares travel at the speed of light, meaning we get no warning that they’re coming. So scientists want to pin down the processes that create solar flares – and even some day predict them before our communications can be interrupted. 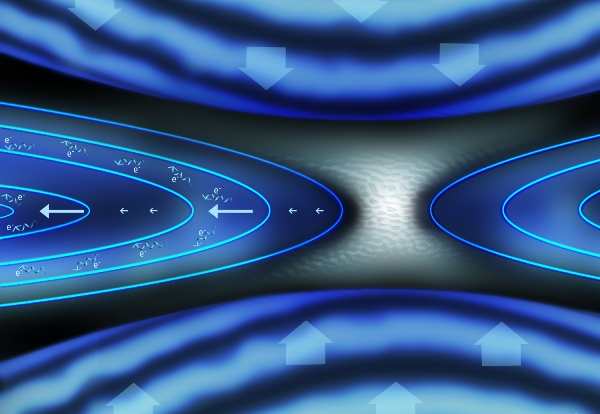 “The existence of a current sheet is crucial in all our models of solar flares,” said James McAteer, an astrophysicist at New Mexico State University in Las Cruces and an author of a study on the December 2013 event, published on April 19, 2016, in the Astrophysical Journal Letters. “So these observations make us much more comfortable that our models are good.”

And better models lead to better forecasting, said Michael Kirk, a space scientist at NASA’s Goddard Space Flight Center in Greenbelt, Maryland, who was not involved in the study. “These complementary observations allowed unprecedented measurements of magnetic reconnection in three dimensions,” Kirk said. “This will help refine how we model and predict the evolution of solar flares.”

A current sheet is a very fast, very flat flow of electrically-charged material, defined in part by its extreme thinness compared to its length and width. Current sheets form when two oppositely-aligned magnetic fields come in close contact, creating very high magnetic pressure. Electric current flowing through this high-pressure area is squeezed, compressing it down to a very fast and thin sheet. It’s a bit like putting your thumb over the opening of a water hose – the water, or, in this case, the electrical current, is forced out of a tiny opening much, much faster. This configuration of magnetic fields is unstable, meaning that
the same conditions that create current sheets are also ripe for magnetic reconnection.

“Magnetic reconnection happens at the interface of oppositely-aligned magnetic fields,” said Chunming Zhu, a space scientist at New Mexico State University and lead author on the study. “The magnetic fields break and reconnect, leading to a transformation of the magnetic energy into heat and light, producing a solar flare.”

“You have to be watching at the right time, at the right angle, with the right instruments to see a current sheet,” said McAteer. “It’s hard to get all those ducks in a row.”

This multi-faceted view of the December 2013 flare was made possible by the wealth of instruments aboard three solar-watching missions: NASA’s Solar Dynamics Observatory, or SDO, NASA’s Solar and Terrestrial Relations Observatory, or STEREO – which has a unique viewing angle on the far side of the Sun – and Hinode, which is a collaboration between the space agencies of Japan, the United States, the United Kingdom and Europe led by the Japan Aerospace Exploration Agency.

Even when scientists think they’ve spotted something that might be a current sheet in solar data, they can’t be certain without ticking off a long list of attributes. Since this current sheet was so well-observed, the team was able to confirm that its temperature, density, and size over the course of the event were consistent with a current sheet.

As scientists work up a better picture of how current sheets and magnetic reconnection lead to solar eruptions, they’ll be able to produce better models of the complex physics happening there – providing us with ever more insight on how our closest star affects space all around us.

This research was funded by a CAREER grant from the National Science Foundation awarded to James McAteer.