Scientists have caught a rare glimpse of ice and fire, witnessing an eruption of the Big Ben volcano, situated on the remote Australian territory of Heard Island in the sub-Antarctic. 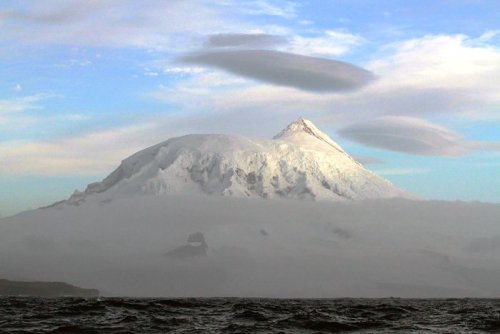 While Big Ben is known to have erupted at least three other times since 2000, catching the volcano massif in the act is extremely unlikely, given how truly removed Heard Island is. Lying some 4,099 kilometres (2,547 miles) southwest of Perth in Western Australia, and almost as far to the southeast of Madagascar, the island ranks among the most remote places on Earth – and researchers haven’t set foot on it in almost 30 years.

Which makes it all the more serendipitous that scientists on board Australia’s CSIRO research vessel, Investigator, on a voyage to the Kerguelen Plateau happened to observe the eruption, in addition to seeing volcanic activity at the neighbouring McDonald Islands – Australia’s only other active volcano.

“Seeing vapour emanating from both of Australia’s active volcanoes and witnessing an eruption at Mawson Peak have been an amazing coda to this week’s submarine research,” said the voyage’s chief scientist, Mike Coffin of the Institute of Marine and Antarctic Studies. “We have 10 excited geoscientists aboard Investigator, and our enthusiasm has spread to our 50 shipmates.”

Seeing Big Ben’s summit – the 2,745-metre (9,000 foot) tall Mawson Peak – in the act of erupting was particularly surprising to those on board, as inclement weather in the area (signs of which you can see in these photos) meant it was highly probable that the elevated peak wouldn’t be visible at all.

“I’m doing my PhD on Heard Island volcanism, and to see lava emanating from Mawson Peak and flowing down the flank of Big Ben over a glacier has been incredible,” said Jodi Fox, a student researcher at the University of Tasmania. “Given persistent cloud cover and generally foul weather, I didn’t think we’d even see Mawson Peak on this voyage.”

Using shipboard sonar systems, the researchers are imaging the seafloor and water column in the area looking for underwater plumes that could represent hydrothermal systems associated with active underwater volcanoes. Although less than halfway through their 58-day trip, the scientists have identified over 50 such potential plumes already.

But, despite the progress made so far, it’s pretty clear what the most memorable highlight of the voyage is likely to be.

“Seeing land after being at sea for a couple of weeks is exciting, but to see dynamic Earth processes such as volcanoes erupting is an added bonus,” said Coffin.

It has long been observed that some volcanoes erupt with little prior warning. Now, scientists have come up with an explanation behind these sudden eruptions that could change the way observers monitor active or dormant volcanoes. 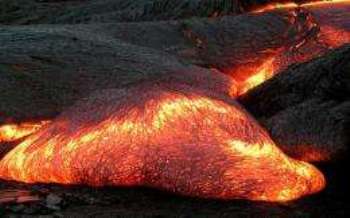 Previously, it was thought eruptions were triggered by a build-up of pressure caused by the slow accumulation of bubbly, gas-saturated magma beneath volcanoes over tens to hundreds of years. But new research has shown that some eruptions may be triggered within days to months by the rapid formation of gas bubbles in magma chambers very late in their lifetime.

Using the Campi Flegrei volcano near Naples, southern Italy, as a case study, the team of scientists, from the universities of Oxford and Durham in the UK, and the Vesuvius Volcano Observatory in Italy, demonstrate this phenomenon for the first time and provide a mechanism to explain the increasing number of reported eruptions that occur with little or no warning.

The study is published in the journal Nature Geoscience.

Lead author Mike Stock, from the Department of Earth Sciences at the University of Oxford, said: ‘We have shown for the first time that processes that occur very late in magma chamber development can trigger explosive eruptions, perhaps in only a few days to months. This has significant implications for the way we monitor active and dormant volcanoes, suggesting that the signals we previously thought indicative of pre-eruptive activity – such as seismic activity or ground deformation – may in fact show the extension of a dormant period between eruptions.

‘Our findings suggest that, rather than seismic activity and ground deformation, a better sign of an impending eruption might be a change in the composition of gases emitted at the Earth’s surface. When the magma forms bubbles, the composition of gas at the surface should change, potentially providing an early warning sign.’
The researchers analysed tiny crystals of a mineral called apatite thrown out during an ancient explosive eruption of Campi Flegrei. This volcano last erupted in 1538 but has recently shown signs of unrest.

By looking at the composition of crystals trapped at different times during the evolution of the magma body – and with the apatite crystals in effect acting as ‘time capsules’ – the team was able to show that the magma that eventually erupted had spent most of its lifetime in a bubble-free state, becoming gas-saturated only very shortly before eruption. Under these conditions of slow magma chamber growth, earthquakes and ground deformation observed at the surface may not be signs of impending eruption, instead simply tracking the arrival of new batches of magma at depth.

Professor David Pyle from the Department of Earth Sciences at the University of Oxford, a co-author of the paper, said: ‘Now that we have demonstrated that this approach can work on a particular volcano, and given apatite is a mineral found in many volcanic systems, it is likely to stimulate interest in other volcanoes to see whether there is a similar pattern.

‘This research will also help us refine our ideas of what we want to measure in our volcanoes and how we interpret the long-term monitoring signals traditionally used by observers.’

The Campi Flegrei volcano system has had a colourful history. The Romans thought an area called Solfatara (where gas is emitted from the ground) was the home of Vulcan, the god of fire. Meanwhile, one of the craters in the system, Lake Avernus, was referred to as the entrance to Hades in ancient mythology.

Additionally, Campi Flegrei has long been a site of geological interest. In Charles Lyell’s 1830 Principles of Geology, he identified the burrows of marine fossils at the top of the Macellum of Pozzuoli (an ancient Roman market building), concluding that the ground around Naples rises and falls over geological time.

Around 720-640 million years ago, much of the Earth’s surface was covered in ice during a glaciation that lasted millions of years. Explosive underwater volcanoes were a major feature of this ‘Snowball Earth’, according to new research led by the University of Southampton. 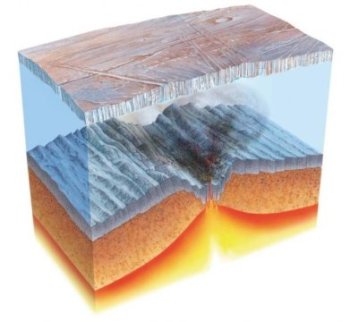 Many aspects of this extreme glaciation remain uncertain, but it is widely thought that the breakup of the supercontinent Rodinia resulted in increased river discharge into the ocean. This changed ocean chemistry and reduced atmospheric CO2 levels, which increased global ice coverage and propelled Earth into severe icehouse conditions.

Because the land surface was then largely covered in ice, continental weathering effectively ceased. This locked the planet into a ‘Snowball Earth’ state until carbon dioxide released from ongoing volcanic activity warmed the atmosphere sufficiently to rapidly melt the ice cover. This model does not, however, explain one of the most puzzling features of this rapid deglaciation; namely the global formation of hundreds of metres thick deposits known as ‘cap carbonates’, in warm waters after Snowball Earth events.

The Southampton-led research, published in Nature Geoscience, now offers an explanation for these major changes in ocean chemistry.

Lead author of the study Dr Tom Gernon, Lecturer in Earth Science at the University of Southampton, said: “When volcanic material is deposited in the oceans it undergoes very rapid and profound chemical alteration that impacts the biogeochemistry of the oceans. We find that many geological and geochemical phenomena associated with Snowball Earth are consistent with extensive submarine volcanism along shallow mid-ocean ridges.”

During the breakup of Rodinia, tens of thousands of kilometres of mid-ocean ridge were formed over tens of millions of years. The lava erupted explosively in shallow waters producing large volumes of a glassy pyroclastic rock called hyaloclastite. As these deposits piled up on the sea floor, rapid chemical changes released massive amounts of calcium, magnesium and phosphorus into the ocean.

Dr Gernon explained: “We calculated that, over the course of a Snowball glaciation, this chemical build-up is sufficient to explain the thick cap carbonates formed at the end of the Snowball event.

“This process also helps explain the unusually high oceanic phosphorus levels, thought to be the catalyst for the origin of animal life on Earth.”