A tornado ripped through the town of Eureka, Kan., on Tuesday, injuring eight people. Gov. Jeff Colyer declared a state of emergency for the area because of widespread damage. 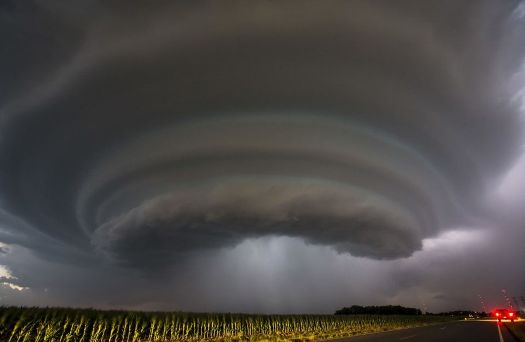 The tornado was part of a violent yet visually stunning complex of storms that left storm chasers in awe.

Eureka, home to about 2,450 residents, is located about 60 miles east of Wichita in Greenwood County. The town reportedly took a “direct hit” from the tornado and the Red Cross opened a shelter for storm victims.

Weather.com reported the storm knocked out power to at least 1,300 customers and left behind extensive tree damage.

The National Weather Service forecast office in Wichita said it is sending a team to assess the tornado damage and will classify the storm on the 0 to 5 Enhanced Fujita rating scale.

The complex of storms that spawned the Eureka twister tore through central and eastern Kansas on Tuesday, resulting in numerous instances of damaging winds and large hail, up to the size of eggs.

Storm satellite imagery showed the thunderstorm complex shooting up tens of thousands of feet into the atmosphere.

In the storm’s wake, dramatic mammatus clouds covered the sky, illuminated by the sun dropping beneath the horizon. “Many, many people are saying they have never seen ‘clouds like that,’” said Mike Smith, a retired meteorologist in Wichita. Smith shared the photo below.