Tropical Storm Aletta is expected to become the first hurricane of the 2018 Eastern Pacific hurricane season, and another area off the Mexican coast could become the second named storm next week. 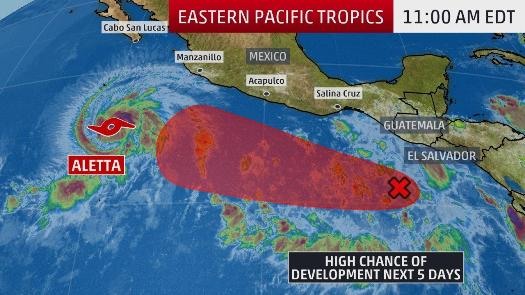 Aletta is just over 400 miles off the Mexican coast and well south of Mexico’s Baja Peninsula.

Given that, Aletta is expected to strengthen to the season’s first hurricane either Thursday or Friday.

Fortunately, a dome of high pressure aloft over northern Mexico will steer Aletta away from the Mexican coast on a general west-northwest track into early next week.

To the east of Aletta, another area of low pressure, a tropical wave, is given high odds by the NHC to develop into at least a tropical depression this weekend south of the Mexican Riviera.

If it eventually becomes a tropical storm, it would earn the name Bud.

It’s too soon to determine whether this second system will eventually pose a direct threat to parts of the Mexican Pacific coast next week.

For now, interests along the Mexican coast from Acapulco to Zihuatanejo, Manzanillo, Puerto Vallarta and Los Cabos should monitor the progress of this second system into next week.

At least some peripheral impacts are possible near the coast from each system, even if the centers of both systems remain offshore.

Some outer rainbands could push ashore, at times, through next week, possibly triggering local flash flooding if they persist in any area for a few hours at a time.

High surf will be generated, propagating first to the southern Mexican coast, then pushing northward toward the Baja Peninsula, including Los Cabos. Breaking waves and rip currents will be a threat along those beaches into at next week.

The average date when the first named storm forms in the Eastern Pacific Basin is June 10, according to NHC data from 1971 to 2009.