Tropical storm Orlene has emerged in the Pacific Ocean hundreds of miles southwest of Mexico and is rapidly strengthening. 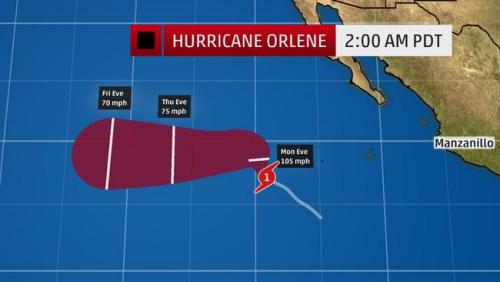 The National Hurricane Center in Miami says Orlene emerged from a tropical depression early Sunday and is centered about 700 miles (1,125 kilometers) southwest of the southern tip of Baja California, Mexico. The storm has top sustained winds of 65 mph (100 kph) and is moving toward the northwest at 9 mph (15 kph).

An advisory issued late Sunday says Orlene is rapidly strengthening and is expected to become a hurricane by late Monday. Forecasters say the storm posed no threat to land early Sunday and that no coastal watches or warnings are in effect.