Two particle jets shoot out from the heart of active galaxy NGC 1052 at the speed of light, apparently originating in the vicinity of a massive black hole. A team of researchers headed by Anne-Kathrin Baczko from the Max Planck Institute for Radio Astronomy Bonn have now measured the magnetic fields in this area. They observed the bright, very compact structure of just two light days in size using a global ensemble of millimetre-wavelength telescopes. The magnetic field value recorded at the event horizon of the black hole was between 0.02 and 8.3 tesla. The team concludes that the magnetic fields provide enough magnetic energy to power the twin jets. 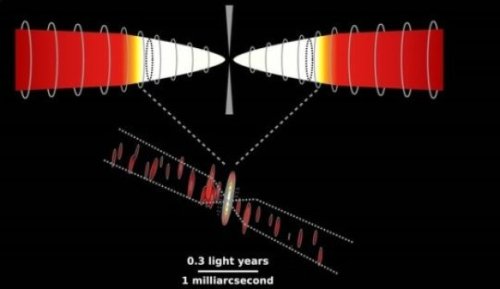 The technique used to investigate details at the centre of galaxy NGC 1052 is known as very-long-baseline interferometry (VLBI), and has the potential to locate the bases of jets at tiny length scales. In fact, these latest observations extend right up close to the event horizon of the central power source — a supermassive black hole. The event horizon marks the boundary between free space and the gravitational pull of the black hole, beyond which no radiation can escape.

The black hole itself remains invisible, however, so its exact position can only be inferred indirectly by tracking the jet positions depending on their wavelengths. The unknown offset distance of the jet base from the black hole makes it difficult to determine fundamental physical properties such as magnetic field values and particle density.

However, the striking symmetry in these latest observations of the twin jets in NGC 1052 allows astronomers to pinpoint the true centre of activity inside the central structure. Only one jet is observed in most other galaxies, but the symmetrical jets of NGC 1052 allow great precision in determining the “centre” and thus also the location of the power source.

With the exception of our own Milky Way, this is the most precisely known location of a supermassive black hole in the universe. “NGC 1052 is truly a key source, since it pinpoints directly and unambiguously the position of a black hole,” says Anne-Kathrin Baczko, who carried out this research at the Universities of Erlangen-Nuremberg and Wurzburg, and at the Max Planck Institute for Radio Astronomy.

NGC 1052 is an elliptical galaxy at a distance of about 60 million light years in the direction of the constellation Cetus (the Whale). The magnetic field at the supermassive black hole was determined by measuring the compactness and brightness of the central region of NGC 1052, yielding values between 0.02 and 8.3 tesla. (By way of comparison, Earth’s magnetic field is only about 50 microtesla.) The central region appears as a strong radio source with a diameter of just 57 microarcseconds: equivalent in size to a DVD on the surface of the moon.

This astonishing resolution was obtained by the Global mm VLBI Array, a network of radio telescopes in Europe, the USA and East Asia, managed by the Max Planck Institute for Radio Astronomy in Bonn. “It yields unprecedented image sharpness and is soon to be applied to reach event-horizon scales in nearby objects,” says Eduardo Ros, a Max Planck researcher who collaborated in the project.

How are powerful relativistic jets formed in the centres of numerous active galaxies? The telescope array observations may help solve this long-standing mystery, as they show that it is possible for jets to be driven by the magnetic energy released by a very rapidly rotating supermassive black hole.