Typhoon Saola was churning along the Pacific coast of Honshu toward Hokkaido Monday morning, with the Meteorological Agency warning the storm was bound to release more heavy rain to northern regions. 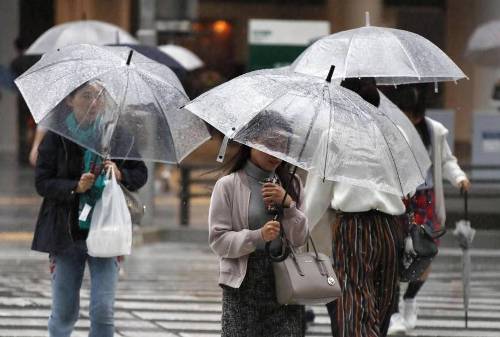 But the season’s 22nd typhoon was weakened into a low-pressure system off Japan’s northeastern coastline early Monday morning after passing south of the Kanto region, the agency said.

The typhoon was moving off the Sanriku coast of Iwate Prefecture as of 12:50 a.m. and had an atmospheric pressure reading of 980 hectopascals. It was heading northeast at a speed of 100 kph, the weather agency said.

On Sunday, the typhoon brought heavy rain to many regions. The cities of Miyazaki and Nichinan, in Miyazaki Prefecture, saw a record amount of rainfall in 24 hours, with more than 400 mm by Sunday morning.

In Miyazaki and Oita prefectures, two women, one aged 79 yand the other 86, fell down and broke their legs.

The agency said the Tokai region would get up to 180 mm of rain over a 24-hour period ending at noon on Monday, 150 mm in the Hokuriku and Kanto-Koshin regions, and 100 mm in the Tohoku region.

According to an NHK report, a total of 86 flights, mostly in Kyushu and Okinawa, were canceled Sunday.

Kyushu Railway Co. halted some operations on sections of the Nippo and Nichinan lines, while East Japan Railway Co. suspended the Sunrise Izumo limited express sleeper service and other services.

The typhoon also disrupted various events, including the 37th Oita International Wheelchair Marathon in Oita Prefecture. The race was due to start Sunday morning but was canceled, its organizers said.

Saola follows in the wake of Typhoon Lan, which battered much of the country with heavy rain and strong winds just a week ago. Lan killed seven people and injured nearly 100 others, causing floods, mudslides and traffic disruptions.

When Lan hit, it also disrupted ballot counting for the Oct. 22 House of Representatives election.

A number of municipalities had issued evacuation advisories to residents and regional election boards had to forgo vote-counting until the ballots could be delivered. On Oct. 23, Lan made landfall in Shizuoka Prefecture and ran over Tokyo, triggering floods, mudslides and traffic disruptions.