The Hong Kong Observatory issued the typhoon signal No 3 at 12.40pm on Thursday – the first strong wind warning since last October – as tropical storm Ewiniar strengthened. 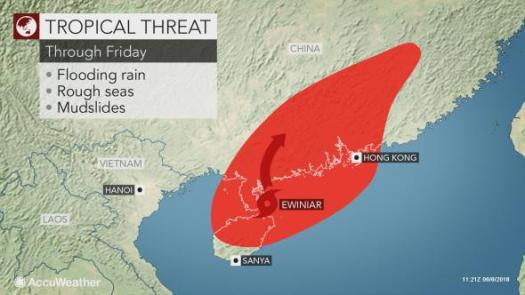 With mean wind speeds of 41km/h to 62km/h expected, the forecaster advised the public to stay away from the shoreline, not do any water sports and to avoid staying in areas exposed to high winds.

Drivers using motorways and flyovers should be alert to violent gusts, the weather authority added.

At 7pm, Ewiniar was about 270km west-southwest of the city. It was expected to move north or northeast at about 10km/h, edging closer to the western coast of Guangdong province on Thursday.

The Observatory said Ewiniar would make its third landfall in the coastal areas near Yangjiang over the western part of Guangdong on Thursday. The signal No 3 was expected to remain in force on Thursday night.

The authority would take into account the variation of local wind strengths in considering whether to change the warning signal on Friday.

It said the storm’s associated rainbands would bring squalls and heavy showers to the Pearl River estuary.

The maximum sustained wind speed near its centre could be as high as 75km/h.

The chance of the typhoon signal No 8 being issued on Thursday was relatively low, the Observatory added.

“These schools, however, should keep their premises open and implement contingency measures to look after arriving students. They should ensure that conditions are safe before allowing students to return home,” a bureau spokesman said.

Flooding was reported in many areas of the city in the morning as heavy rain continued to fall.

In Tai Po, a junction near Kam Shan Road was submerged in brownish water. Tai Po residents uploaded photos of the mud-filled area to a Facebook group at about 7am, showing a vehicle trying to pass through, as it was the only road leading to Kam Shan.

Exit A2 at Diamond Hill MTR station was closed due to flooding at a nearby construction site. Flooding was also reported at Man Kam To interchange bus station.

Police received reports of falling trees. An incident in Tai Wai involved a tree smashing the windscreen of a vehicle. There were no reports of any injuries.

“Beachgoers are advised not to swim at these beaches,” a spokesman for the department said.

The Observatory issued a special announcement on flooding in the northern New Territories at 6.50am, after more than 100mm of rainfall was recorded in the area in the hours before.

“Residents in the northern New Territories, who are likely to be affected, are advised to take necessary precautions to avoid possible flood damage,” the weather authority said, warning that heavy rain could bring flash floods.

More than 70mm of rainfall was recorded in Sha Tin between 5.35am and 6.35am, and was cited as a flood risk.