Scientists have discovered an underwater chain of volcanoes off the coast of Tasmania. A team from the Australian National University mapped the submerged terrain during a voyage aboard the Commonwealth Scientific and Industrial Research Organisation (CSIRO) research ship “Investigator.” 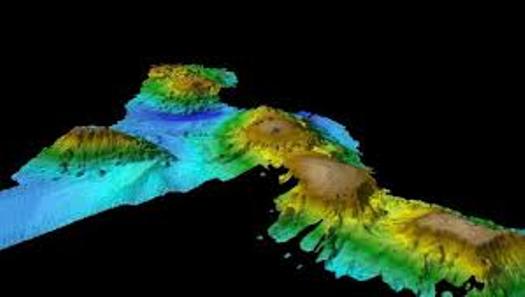 The underwater peaks, or seamounts, reach more than 9,000 feet high, but vary in shape and size. Researchers hope having detailed maps of the underwater area will help protect the environment, while aiding in future research.

“This is a very diverse landscape and will undoubtedly be a biological hotspot that supports a dazzling array of marine life,” Dr. Tara Martin from the CSIRO mapping team said in a statement.

So far, data from the research ship has already revealed increased marine life activity along the volcano chain.

“While we were over the chain of seamounts, the ship was visited by large numbers of humpback and long-finned pilot whales,” said Dr. Eric Woehler, who was aboard the Investigator. “Clearly these seamounts are a biological hotspot that supports life, both directly on them, as well as in the ocean above.”

According to Dr. Woehler, the whales may be using the seafloor to help navigate their way through the ocean during migration from winter breeding to summer feeding grounds.

The next step for researchers is to head back to the area, located about 250 miles east of Tasmania, off Australia’s southern coast. The Investigator has a voyage this month, and then another one in December. During the trips, researchers will be gathering high-resolution video of marine life, as well as collecting rock samples to study how this formed.