Typhoon Lekima is hammering Japan’s southern Ryukyu Islands while also soaking Taiwan before heading for eastern China by this weekend. 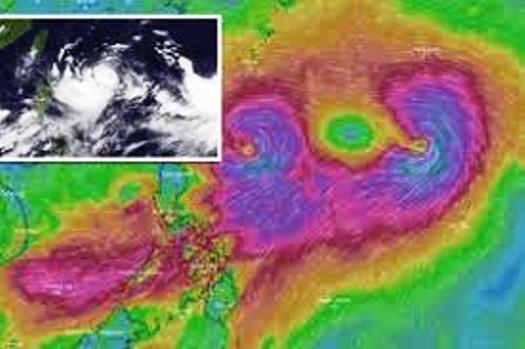 Lekima is currently centered about 180 miles west of Kadena Air Base in Okinawa and is heading northwestward.

After rapidly intensifying Tuesday into Wednesday, Lekima became a super typhoon (winds 150 mph or greater) for a short time late Thursday into early Friday. Lekima has since weakened slightly to a Category 4 hurricane.

Damaging winds and heavy rain continue battering Japan’s southernmost Ryukyu Islands, including Ishigaki and Miyako, and the super typhoon’s outer eyewall tracks across the islands. Winds had gusted as high as 46.6 m/s or 104 mph at Miyako Shimojishima Airport as of early Friday morning local time (JST). Sustained typhoon force winds (33.5 m/s or 75 mph) has been reported in Miyako. Ishigaki has received 198 mm or around 7.8 inches of rainfall so far.

Typical of intense tropical cyclones, the eye of Lekima wobbled as it tracked through the Ryukyu Islands, passing near the islands of Tarama and Minna, about 200 miles east-southeast of Taipei, Taiwan.

Lekima will pull away from southern Japan during the early morning hours of Friday, and winds will begin to come down.

Lekima is forecast to move north of Taiwan on Friday afternoon into the evening, local time in Taiwan (CST). Heavy rain and strong wind gusts from Lekima will still impact parts of Taiwan even though the center of the typhoon won’t make landfall there.

The Central Weather Bureau in Taiwan has issued typhoon warnings for northern parts of Taiwan.

More than a foot of rain is currently forecast through Saturday in the higher elevations of Taiwan. The excessive rainfall could trigger flooding, as well as landslides.

Rainfall totals of more than 8 inches had already been reported on Thursday in parts of Taiwan as of early Friday morning, local time.

This weekend, Lekima will be on a weakening trend as it curls northward near the eastern coast of China, potentially including near Shanghai.

Heavy rain could trigger flooding in eastern China. Strong winds and storm surge flooding are also possible depending on the exact track and intensity of Lekima as it moves near, inland or offshore from the coastline.

Typhoon Krosa
Several hundred miles to the east of Lekima is Typhoon Krosa which now has winds equivalent in strength to a Category 2 hurricane.

Krosa may be getting weakened by its relatively slow motion, which cools water down in a process called upwelling.

When Krosa begins to gain more latitude, it’s possible Krosa could approach mainland Japan early next week as a typhoon, but the forecast this far out in time is highly uncertain.

Francisco made landfall in southern Japan as typhoon Tuesday morning local time, with maximum sustained winds of 85 mph, according to the U.S. Joint Typhoon Warning Center.

A Quiet Typhoon Season Before This Week
This year had been uncommonly calm for typhoon activity through Aug. 4 in the Northwest Pacific, which is normally the most active region on Earth for tropical cyclones. The only typhoon recorded in 2019 through Aug. 4 was Wutip, the first Category 5 super typhoon on record in February. Wutip passed south of Guam and Micronesia as a Category 4 storm, producing more than $3 million in damage.

Japan is accustomed to typhoons. In a typical year, three typhoons strike Japan, according to data from the Japan Meteorological Agency analyzed by nippon.com. Landfalls are most common in August, but the most destructive typhoons tend to be in September.

Since 1950, no other year had gone from Feb. 28 to Aug. 4 without any typhoons, as noted by Dr. Phil Klotzbach of Colorado State University. Francisco put an end to that streak when it became a typhoon on Aug. 5.

The amount of accumulated cyclone energy in the Northwest Pacific – which is calculated based on how strong tropical cyclones get and how long they last – was only a little over half of average for the year as of Aug. 2, according to data compiled by Colorado State University.

So, what’s the difference between this quiet period and now?

At least one factor that may be having its hand on the “on” switch for the west Pacific is the Madden-Julian Oscillation.

The MJO is essentially a wave of increased storminess, clouds and pressure that moves eastward around the globe once every 40 days or so.

In the tropics, the MJO is known to kick up or assist in tropical cyclone development.

A robust MJO wave is now moving through eastern Asia and the western Pacific, and likely helped the recent tropical cyclone outbreak fester.