Two tough, resilient NASA spacecraft have been orbiting Earth for the past six and a half years, flying repeatedly through a hazardous zone of charged particles known as the Van Allen radiation belts. The twin Van Allen Probes have confirmed scientific theories and revealed new structures, compositions, and processes at work in these dynamic regions. 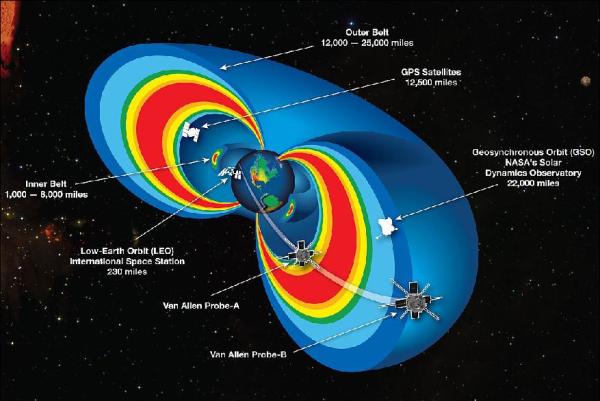 In February, the Van Allen Probes mission operations team at the Johns Hopkins Applied Physics Laboratory—where the probes were designed and built—began a series of orbit descent maneuvers that will position the satellites for an eventual re-entry into Earth’s atmosphere in approximately 15 years.

“At the new altitude, aerodynamic drag will bring down the satellites and eventually burn them up in the upper atmosphere,” said Nelli Mosavi, project manager for the Van Allen Probes at APL. “Our mission is to obtain great science data and also to ensure that we prevent more space debris so the next generations have the opportunity to explore space as well.”

Originally designated as a two-year mission because no one believed that a spacecraft could survive longer in the harsh radiation belts that surround Earth, these rugged spacecraft have operated without incident since 2012 and continue to enable groundbreaking discoveries about the Van Allen belts.

“The spacecraft and instruments have given us incredible insight into spacecraft operations in a high-radiation environment,” Mosavi said. “Everyone on the mission feels a real sense of pride and accomplishment in the work we’ve done and the science we’ve provided to the world—even as we begin the de-orbiting maneuvers.”

“We know that other planets in our solar system with magnetic fields have radiation belts,” said Sasha Ukhorskiy, a project scientist at APL. “We can assume that other bodies throughout the universe do too. By studying the belts and the physics associated with them here at Earth, and using our world as a natural laboratory, we can learn about how these structures function around other objects in the universe with magnetic fields.”

The magnetic field surrounding Earth creates a bubble known as the magnetosphere, which protects the planet from plasma blasts sent out by the sun. But it also serves to capture particles and can eventually settle these high-energy particle populations into radiation belts around Earth.

A complex chain of processes occurs in this near-Earth environment, acting like a giant particle accelerator and speeding some particles up to nearly the speed of light—more than 670 million miles an hour. These highly energized particles in the radiation belts can pose a number of hazards to space operations, as they can damage sensitive electronics.

During solar storms, conditions worsen, and the belts can swell in size, threatening nearby spacecraft.

“Our magnetic field does a pretty good job of shielding us from these solar blasts,” said David Sibeck, a mission scientist at NASA’s Goddard Space Flight Center in Greenbelt, Maryland. “But some of their energy penetrates deep into the Earth’s field and, through a variety of mechanisms, powers up the radiation belts. When that happens, spacecraft in the belts had better look out: Trouble lies ahead in the form of short circuits, disrupted computer memory, and instrument failure.”
The Van Allen Probes were designed and built to be resilient in this extreme environment—and even their builders were surprised by their ability to withstand such harsh conditions.

“Over the past six and a half years, the Van Allen Probes have completed three full circuits around the magnetosphere, and measured more than 100 geomagnetic storms,” Ukhorskiy said. “The Van Allen Probes verified and quantified previously suggested theories, discovered new mechanisms that can sculpt near-Earth energetic particle populations, and used uniquely capable instruments to unveil unexpected features that were all but invisible to previous sensors.”

The information on particles and waves delivered by the Van Allen Probes has proved to be a treasure trove for space physics research. Findings and observations include multiple belt structures, including a third belt observed shortly after launch; definitive answers about particle acceleration processes; and the discovery of a nearly impenetrable barrier region that prevents the fastest and most energetic electrons from reaching Earth.