An international team of astronomers has revealed an ‘astonishing’ overabundance of massive stars in a neighbouring galaxy. 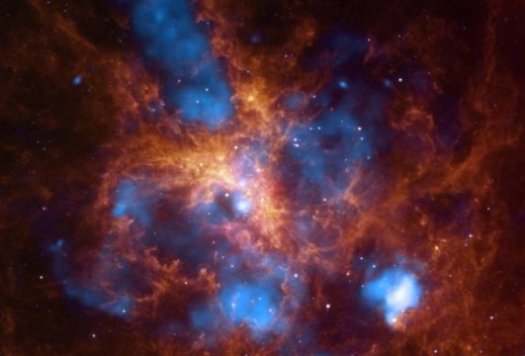 The discovery, made in the gigantic star-forming region 30 Doradus in the Large Magellanic Cloud galaxy, has ‘far-reaching’ consequences for our understanding of how stars transformed the pristine Universe into the one we live in today.

The results are published in the journal Science.

Lead author Fabian Schneider, a Hintze Research Fellow in the University of Oxford’s Department of Physics, said: ‘We were astonished when we realised that 30 Doradus has formed many more massive stars than expected.’

As part of the VLT-FLAMES Tarantula Survey (VFTS), the team used ESO’s Very Large Telescope to observe nearly 1,000 massive stars in 30 Doradus, a gigantic stellar nursery also known as the Tarantula nebula. The team used detailed analyses of about 250 stars with masses between 15 and 200 times the mass of our Sun to determine the distribution of massive stars born in 30 Doradus — the so-called initial mass function (IMF).

Massive stars are particularly important for astronomers because of their enormous influence on their surroundings (known as their ‘feedback’). They can explode in spectacular supernovae at the end of their lives, forming some of the most exotic objects in the Universe — neutron stars and black holes.

In most parts of the Universe studied by astronomers to date, stars become rarer the more massive they are. The IMF predicts that most stellar mass is in low-mass stars and that less than 1% of all stars are born with masses in excess of ten times that of the Sun. Measuring the proportion of massive stars is extremely difficult — primarily because of their scarcity — and there are only a handful of places in the local Universe where this can be done.

The team turned to 30 Doradus, the biggest local star-forming region, which hosts some of the most massive stars ever found, and determined the masses of massive stars with unique observational, theoretical and statistical tools. This large sample allowed the scientists to derive the most accurate high-mass segment of the IMF to date, and to show that massive stars are much more abundant than previously thought. Chris Evans from the Science and Technology Facilities Council’s UK Astronomy Technology Centre, the principal investigator of VFTS and a co-author of the study, said: ‘In fact, our results suggest that most of the stellar mass is actually no longer in low-mass stars, but a significant fraction is in high-mass stars.’

Stars are cosmic engines and have produced most chemical elements heavier than helium, from the oxygen we breathe every day to the iron in our blood. During their lives, massive stars produce copious amounts of ionising radiation and kinetic energy through strong stellar winds. The ionising radiation of massive stars was crucial for the re-brightening of the Universe after the so-called Dark Ages, and their mechanical feedback drives the evolution of galaxies. Philipp Podsiadlowski, a co-author of the study from the University of Oxford, said: ‘To quantitatively understand all these feedback mechanisms, and hence the role of massive stars in the Universe, we need to know how many of these behemoths are born.’

Fabian Schneider added: ‘Our results have far-reaching consequences for the understanding of our cosmos: there might be 70% more supernovae, a tripling of the chemical yields and towards four times the ionising radiation from massive star populations. Also, the formation rate of black holes might be increased by 180%, directly translating into a corresponding increase of binary black hole mergers that have recently been detected via their gravitational wave signals.’

The team’s research leaves many open questions, which they intend to investigate in the future: how universal are the findings, and what are the consequences of this for the evolution of our cosmos and the occurrence of supernovae and gravitational wave events?