A new paper published this month in The Astronomical Journal by astronomers from the Sloan Digital Sky Survey (SDSS) reports a wellspring of new brown dwarf stellar companions, throwing cold water on the entire idea of the “brown dwarf desert,” the previously mystifying lack of these sub-stellar objects around stars. 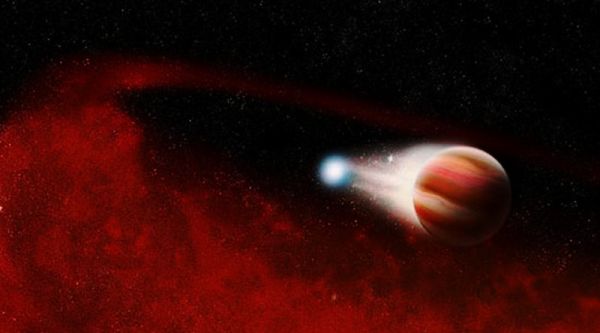 Most stars in our Galaxy have a traveling companion. Often, these companions are stars of similar mass, as is the case for our nearest stellar neighbors, the triple star system Alpha Centauri. 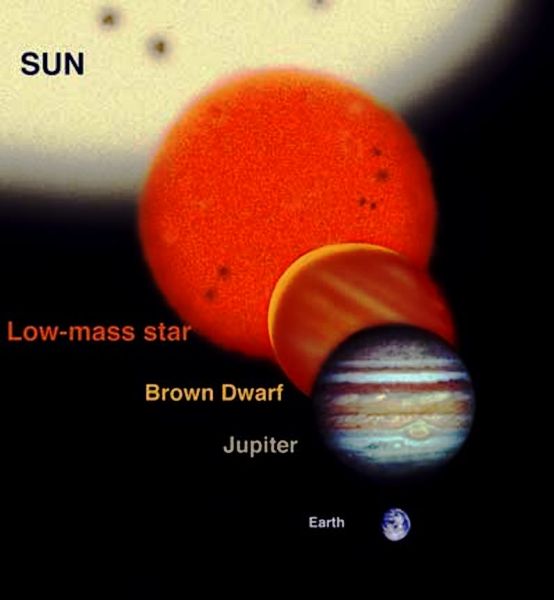 Our Sun, of course, has companions of its own – the planets of our Solar System. Planetary companions are vastly different from stellar companions: they are much smaller, and they do not shine with their own light created through nuclear fusion. Even the largest planet in our Solar System, Jupiter, would need to be 80 times more massive to even begin to shine this way.

Stuck in the middle are “brown dwarfs,” much bigger than Jupiter but still too small to be shining stars. These brown dwarfs give off merely a dim glow as they slowly cool. The Universe is full of stars, and now we know that it is full of planets too. Astronomers expected that the Universe would also be teeming with brown dwarfs.

But strangely, that’s not what they had been finding. Although astronomers have found plenty of brown dwarfs floating through space on their own, they found very few as stellar companions. Even in recent years, as new and sensitive detection techniques have allowed them to discover thousands of extrasolar planets, brown dwarfs have remained elusive – in spite of the fact that they should be easier to find than planets.

In fact, until recently, so few brown dwarfs have been found orbiting close to other stars that astronomers refer to the phenomenon as the “brown dwarf desert.” This in turn created a problem for theorists, who have been scrambling to explain why astronomers have found so few. Therefore when SDSS astronomers started sifting through their data looking for brown dwarf companions to stars, they were hoping not to come up completely dry.

“We were shocked to find that so many of the stars in our sample have close-orbiting brown dwarf companions,” says Nick Troup of the University of Virginia, lead author of the paper. “We never expected to triple the total number of known brown dwarf companions with only a few years’ worth of observations.”

The team’s success is due to an unlikely tool in the race to find low-mass stellar companions. The Apache Point Observatory Galactic Evolution Experiment (APOGEE) was designed as a substantial survey of stars in our Milky Way to make a large-scale map of their motions and chemical compositions. But the instrument built for the APOGEE project is so sensitive to small stellar motions that companions orbiting these stars can be detected with APOGEE data.

When an object orbits a star, it tugs at it, causing the star to move on a little orbit of its own. For example, Jupiter tugs on the Sun enough to make it wobble around in space by more than its own diameter. To a distant observer, this wobble can be detected—and the mass of the tugging object can be determined—through changes in the motion of the star. This motion is seen through the Doppler effect, the same phenomenon that is the basis of the patrol officer’s speed gun and the meteorologist’s Doppler radar rain map. While APOGEE was designed to measure the grand motions of stars speeding around the Galaxy, it was never intended to do so at the subtle precisions needed to detect the much tinier wobbles induced by small sub-stellar companions.

“This level of precision was a serendipitous bonus of the design of the APOGEE spectrograph”, says John Wilson, University of Virginia astronomer and leader of the APOGEE instrument team. “The entire instrument has to be contained in a giant steel vessel in a vacuum at –320 degrees F, otherwise the instrument’s own heat would swamp the infrared signals from the stars.” It turns out that this tightly controlled environment makes it possible to use the APOGEE instrument to measure Doppler shifts reliably over the course of months or years, a feat not achievable by many other spectrographs.

“Even with the first data obtained a few years ago, it was clear that we could use APOGEE to detect the motions of planet-sized objects around our target stars,” says David Nidever of the University of Arizona and the Large Synoptic Survey Telescope, who was responsible for writing much of the software that measures the Doppler motions in APOGEE spectra. “It definitely opened our eyes to the possibilities of doing a more systematic search for planets and brown dwarfs.”

To undertake such a search, the team started with the 150,000 stars that APOGEE had observed. The astronomers winnowed that collection of stars down to a “prime sample” of about four hundred representing the best examples of stars with companions in the APOGEE data. Among these, they identified about 60 stars with evidence for planetary-mass candidates, which was already exciting.
But the real surprise came with the researchers’ extraordinary haul of 112 brown dwarf candidates – twice as many than had been found in the previous 15 years.

Why has the APOGEE team been so lucky in finding this oasis of brown dwarfs? Troup thinks it may have to do with the types of host stars that they are looking at. “Most people doing planet searches have been interested in finding the next Earth, so they’ve focused their efforts on stars similar to the Sun,” Troup says. “But we had to work with the stars that APOGEE surveyed, which are mostly giant stars.”

The reasons why brown dwarf companions are more common around giant stars is just one of many new questions raised by this new study that the Sloan team is investigating. And the team will continue to test their results with the ever-growing flow of APOGEE data.

“It’s completely unprecedented that this many brown dwarf companions have been found at once, so we are anxious to see if the trend persists as the APOGEE sample grows to several times larger,” Troup said.
Read more at: http://phys.org/news/2016-03-oasis-brown-dwarf-desertastronomers-relieved.html#jCp