The western Pacific is finally shaking out of its doldrums because of a pair of tropical cyclones that not only could strengthen, but could also perform a rare, bizarre, circular dance east of Japan called the Fujiwhara effect. 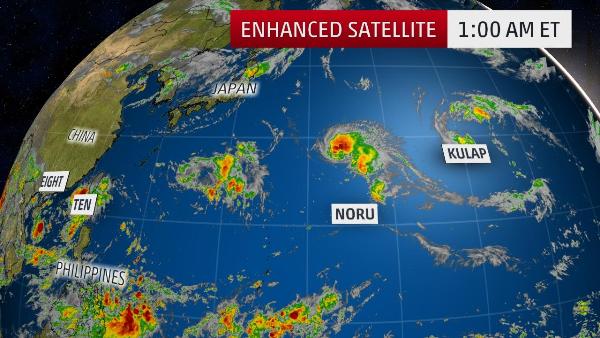 Additionally, Tropical Depression 10W formed late Friday over the Luzon Strait. This tropical cyclone will remain weak but could enhance rainfall along the south coast of China, including Hong Kong, late Sunday into Monday.

Noru and Kulap may not look impressive yet, but their future in the week ahead is meteorologically fascinating.

Noru is expected to eventually become a typhoon by early in the week but will meander over the next five days well east of Japan. Kulap, however, should make significant progress toward the west-northwest and may become close enough to begin an intricate, possibly fatal dance with Noru.

Various numerical forecast models have suggested Noru and Kulap may, essentially, pinwheel around each other, something meteorologists call the Fujiwhara effect.

Named for a Japanese researcher who discovered this in experiments with water in the early 1920s, the Fujiwhara effect details how two tropical cyclones 800 to 900 miles apart rotate counter-clockwise about one another. Think of the teacup ride at Disney or the Tilt-a-Whirl at your local county fair, but with tropical systems instead.

“The western tropical cyclone (Noru) is going to be the center of gravity, in a sense, where the smaller system (Kulap) is forecast to cyclonically orbit the larger system for a couple of days,” said Dr. Michael Ventrice, meteorological scientist with The Weather Company.

Typically, the stronger storm will dominate the weaker, either fizzling it or merging with it altogether. In this case, Noru may be the stronger “survivor” of this.

Ventrice said he believes Noru’s outflow will suppress convection for the smaller Kulap once they begin to interact.

Some forecast guidance suggests Noru may essentially ingest Kulap, then become an intense typhoon and still remain sitting in place well into the week ahead, if not the following week. It certainly makes for strange-looking model forecast tracks.

Why is this happening? Blame a clogged-up upper atmosphere.

“The reason for the stalling Fujiwhara tropical cyclones is likely tied to the development of a large blocking ridge over the north Pacific,” said Ventrice. “This is going to stagnate flow over the northwest Pacific, which doesn’t give this future pair – or merged cyclone – much steering flow.”

Given this blocked atmosphere, we can’t completely rule out Noru eventually creeping closer to Japan sometime near the end of July or early August.

Regardless, this long-lasting tropical cyclone will churn up impressive swells that may reach not just Japan’s east coast, but may also propagate farther south and west.

Not to mention, the satellite imagery from this potential Fujiwhara effect may be among the most impressive weather imagery of 2017 to meteorologists and weather enthusiasts alike.

If you haven’t heard the word “typhoon” in a while, it’s because there hasn’t been one yet in 2017, and we’re nearing a record wait for the year’s first.

Through July 19, there have been only four tropical storms – Muifa in late April, Merbok in mid-June, Nanmadol in early July, Talas in mid-July – in 2017 in the northwestern Pacific Basin.

According to Dr. Phil Klotzbach, Colorado State University atmospheric scientist, three to four typhoons have typically developed by mid-July in an average year. Two of those typhoons would have reached at least Category 3 intensity in a typical year-to-date, as well.

“One of the reasons for suppression of the (Northwest Pacific tropical cyclone) season to date is that we’ve generally had sinking motion across most of the basin since early May,” said Klotzbach.

Stronger-than-average trade winds, blowing east-to-west near the Philippines, Taiwan and the South China Sea, have also been in place since May, Klotzbach said. This increases wind shear, which tends to either prevent tropical cyclones from forming or rip apart those that have formed.

Klotzbach’s calculations indicate roughly 80 percent of the year’s activity, on average, still lies ahead in the planet’s most active basin for tropical cyclones: the northwest Pacific Ocean.