The winter storm battering parts of New England Monday isn’t expected to drop 2 to 3 feet of snow in one go, but officials warn that wild winds and blizzard conditions could still cause power outages and tree damage – and make for an uncomfortable, if not dangerous, commute. 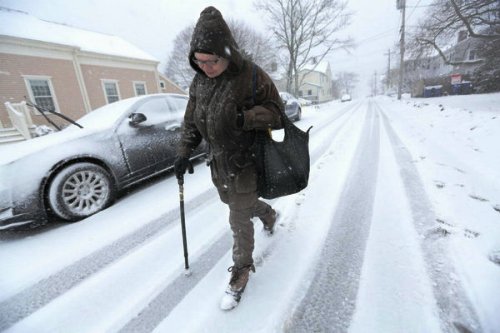 The National Weather Service has issued blizzard warnings from the south of Boston to the South Shore, while areas of eastern New England – including Boston, Hartford, and Providence – are under winter storm warnings. Snow, which began after 8 a.m., may fall at rates of more than an inch an hour in parts of eastern New England, The Weather Channel reports.

But “[i]t’s not just the snow we are talking about – very strong winds, coastal flooding concerns – there could be some power outages, especially south of Boston,” said Cindy Fitzgibbon, meteorologist for Boston’s WCVB 5.

“The heaviest snow will fall this morning into mid/late afternoon across the region,’’ forecasters noted, according to the Boston Globe. “The greatest impact from this storm will not be specific snow amounts, but blizzard conditions.’’

The winter storm, dubbed Mars by The Weather Channel, is a result of a low pressure area off the East Coast – an area that went through what meteorologists call “bombogenesis,” or a sudden central pressure drop of at least 24 millibars in 24 hours.

“ ‘Bombogenesis’ follows from ‘cyclogenesis,’ which refers to the development of a cyclone,” wrote Stu Ostro, a senior meteorologist with The Weather Channel. “Bombs are so named because of the rapidity with which they develop, which evokes explosiveness, and the power that they usually attain once they have gone through the intensification phase specified in the definition.”

Boston Public Schools and dozens of other public and private colleges have canceled classes Monday. The Massachusetts Port Authority has also warned travelers to check their itineraries before heading to Boston’s Logan International Airport, noting that some airlines “have already begun cancelling a number of flights and may be making accommodations for those impacted passengers.”