Many residents in the southeast U.S. and along the Gulf Coast are already thinking about the 2019 Atlantic hurricane season, which begins on June 1. Last year brought two of the most destructive storms to ever hit the U.S.: Hurricane Florence and Hurricane Michael. 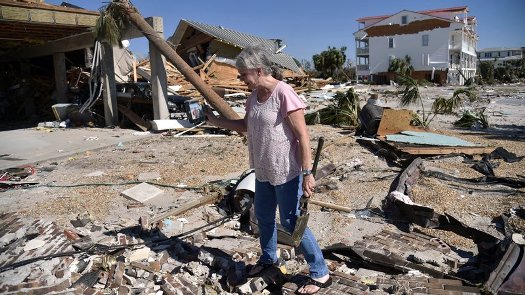 There have been dramatic improvements in hurricane forecasting over the past 20 years. The greatest progress has been made in forecasting a hurricane’s track, including where and when it will make landfall. But the harder challenge is predicting a storm’s intensity, especially for hurricanes like Michael that continue to strengthen as they approach the coast.

As the next hurricane season approaches, researchers are working on new tools to help forecast the intensity of forthcoming storms, enabling residents and emergency managers to be more prepared.

For Hurricane Michael, the National Hurricane Center began issuing advisories five days before it struck Florida’s panhandle, when it was just a disturbance moving toward the Gulf of Mexico. Two days later it was a hurricane, one that continued to strengthen.

No forecasts anticipated how powerful the storm would be at landfall, slamming into Mexico Beach, Fla., as a Category 5 hurricane. It’s one of only four storms that powerful ever to hit the U.S. mainland. “The intensity forecasts were too low,” says Eric Blake, a meteorologist with the National Hurricane Center in Miami. “They’re better than they would have been 20 years ago but still too low.”

Three days before Michael made landfall, it was just a tropical storm. Forecasters warned residents along Florida’s Gulf Coast to prepare for a possible Category 2 hurricane with 100 mile-per-hour winds. A day later, as Michael strengthened, the forecasts upgraded it to Category 3. But as Michael neared Florida’s panhandle, it kept getting stronger, taking even seasoned meteorologists by surprise when it came ashore as a Category 5, with 160 mile-per-hour winds and a 14-foot storm surge.

Blake says a more accurate forecast of Michael’s intensity would have helped emergency managers and residents make decisions about evacuating. “It would have gotten the message out earlier,” he says. “If we were saying right off the bat, ‘Here it is. We’re expecting … Category 4, Category 5,’ that’ll catch people’s attention.”

Researchers with the National Oceanic and Atmospheric Administration are working on the problem with improved hurricane models. One is the Hurricane Weather Research and Forecasting model. It uses data gathered from satellites and aircraft to better understand what’s going on inside a hurricane. It has been in operation for only about a decade but has improved every year.

Meteorologist Jason Sippel says that like other models, HWRF underestimated Hurricane Michael. But it got some key things right.

Frank Marks, the director of NOAA’s Hurricane Research Division, has overseen HWRF’s development. Other countries have global weather forecast models that sometimes outperform the main U.S. model, known as GFS. But no other countries have a regional hurricane model like HWRF, which still needs to be improved.

But, Marks says, HWRF is already helping save lives. “The day before the storm hit, there were 250 people still on Mexico Beach. But by the next morning, the morning before when the storm made landfall, there were only 25. So the messaging got through.”

While researchers are making progress, efforts to improve NOAA’s hurricane models have had setbacks. Some involve science, but some are political. As they prepared for the upcoming hurricane season, researchers had to suspend work earlier this year for six weeks because of the partial government shutdown. Some are worried now about another possible government shutdown in October at the height of hurricane season.