Friday at 12 midnight Wreaths Across America will end. Wreath’s will be laid the following morning at military cemeteries across the nation. This will be done with full ceremonies honoring those who game their lives. My two girls will be in full scout dress for this event. See below to sponsor your wreath today.

What does it mean to sponsor a veteran’s wreath? It means you will honor an American hero at one of more than 1,400 locations nationwide this year on Wreaths Across America Day. It is a day that is been set aside to lay wreaths at the places where we remember, honor, teach about our veterans.

We cannot do that without your support, though. Your sponsorship will ensure that a wreath is hand-crafted of all-American balsam and hand-tied with a red velvet bow here in Columbia Falls, Maine. It will then be sent to one of our participating locations, where a volunteer will place it on the marker of a fallen hero. That volunteer will then “say their name” to ensure that the legacy of duty, service, and sacrifice of that veteran is never forgotten.

So, what does it mean to sponsor a wreath? It means you have the opportunity to join a grateful nation in saying “thank you” to our veterans. 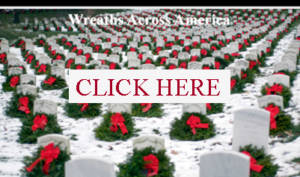