A team of scientists including Carnegie’s Michael Ackerson and Bjorn Mysen revealed that granites from Yosemite National Park contain minerals that crystallized at much lower temperatures than previously thought possible. This finding upends scientific understanding of how granites form and what they can teach us about our planet’s geologic history. Their work is published in Nature. 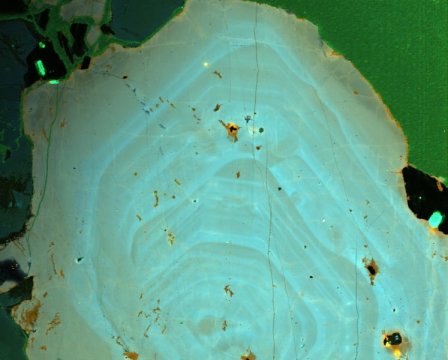 Granites are igneous rocks comprised predominately of the minerals quartz and feldspar. They are the link between igneous processes that occur within the Earth and volcanic rocks that solidified on Earth’s surface.

“Granites are the ultimate product of the processes by which our planet separated into layers and they are key to understanding the formation of the continental crust,” Ackerson said. “Minerals from granites record almost all of our planet’s history — from 4.4 billion years ago to today.”

So, understanding the conditions under which granites form is important to geoscientists trying to unravel the processes that have shaped the Earth.

Until now, the prevailing wisdom on granites was that the minerals that comprise them crystallize as the molten rock cools to temperatures between 650 and 700 degrees Celsius (or between about 1,200 and 1,300 degrees Fahrenheit). Below these temperatures, the granites have been assumed to be completely crystallized.

It was previously known that under certain conditions some of the minerals of which granite is comprised can solidify at lower temperatures. So, the team — which also included Nicholas Tailby of the American Museum of Natural History and Bruce Watson of the Rensselaer Polytechnic Institute — used lab analysis to determine the temperatures of granite crystallization in granites from Yosemite National Park.

The team employed a technique called titanium in quartz thermometry. By measuring the amount of titanium dissolved in the quartz crystals, the team was able to determine the temperatures at which it crystallized deep in the Earth when the granites formed 90 million years ago.

They demonstrated that quartz crystals in samples of a body of granite body called the Tuolumne Intrusive Suite in Yosemite crystallized at temperatures between 474 and 561 Celsius (or 885 and 1,042 degrees Fahrenheit) — up to 200 degrees cooler than previously thought possible for granites.

“These granites tell a different story,” Ackerson added. “And it could rewrite what we think we understand about how Earth’s continents form.”

These findings could influence our understanding of the conditions in which the Earth’s crust first formed during the Hadean and Archean. They could also explain some recent observations about the temperature at which volcanic magmas exist before eruption and the mechanisms through which economically important ore deposits form.